The Ultimate Advantage of Graphlytic in the Parallel Relationships Graph Models

Graph models with parallel relationships are a perfect solution for use cases where you need to analyze events occurring between any two nodes in the graph. Events, in this case, are recorded interactions that:

For visualization purposes, it is very intuitive to model such events/interactions as relationships between graph nodes. In the case of multiple events occurring between the same pair of nodes, a new parallel relationship can be created to keep track of the changes over time.

Graphlytic's features like 'Timeline', 'Merging of relationships' and 'Virtual Properties' allow users to work efficiently with such graphs with benefits including:

Known limitations - every model has its pros and cons. Parallel relationship models have some downsides that should be considered:

Specific use cases that successfully utilize the strengths of parallel relationship models are for instance Scientific Research, Communication Analysis, or Process Analysis. For more details please take a look at this article: Top 7 Graph Use Cases for 2020. And How to Add Yours.

In the picture below, there is an example of a parallel relationship model used for the analysis of phone logs. Events are calls (relationships) between people (nodes). 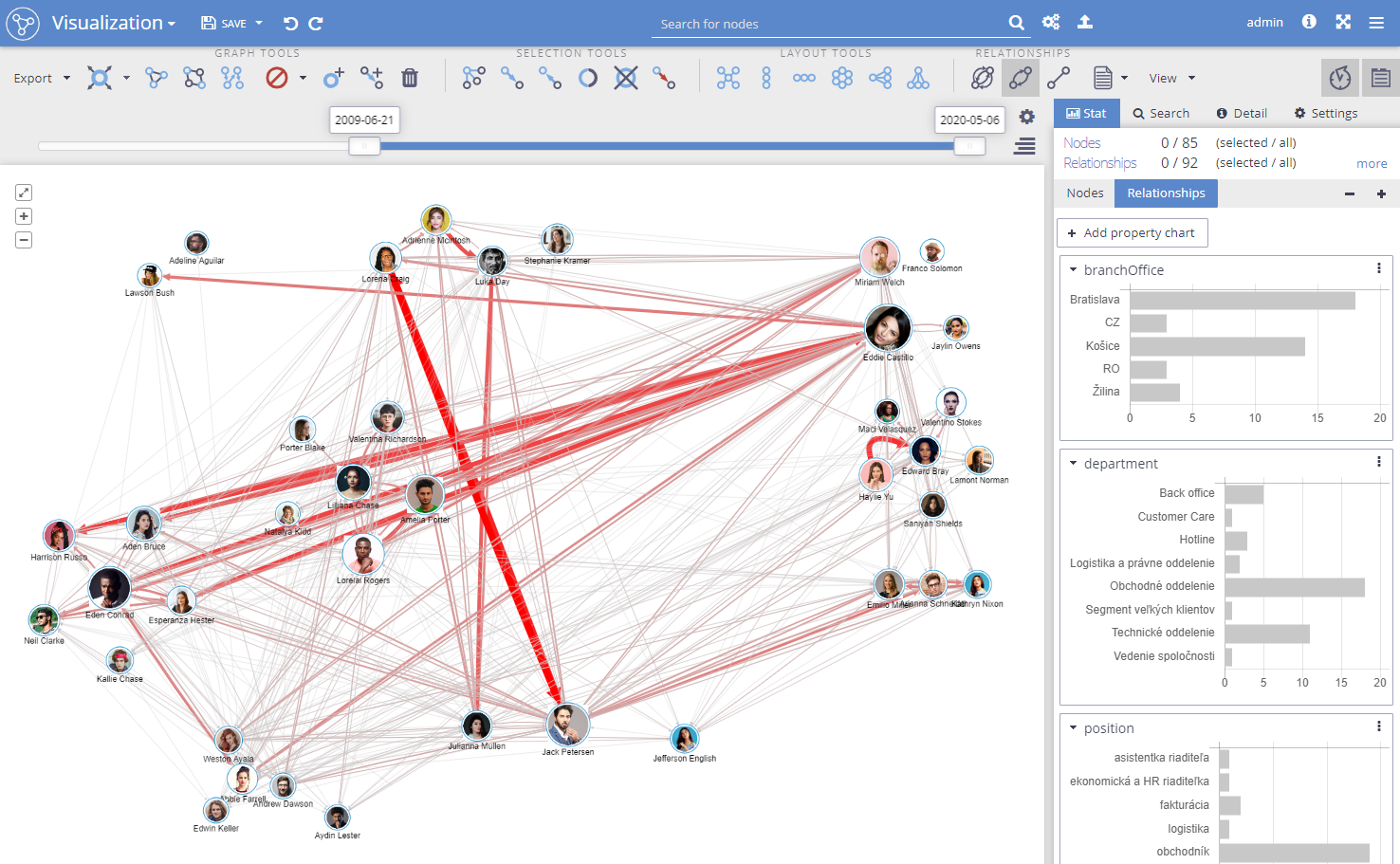 Together with Graphlytic's Timeline, Virtual properties, and histogram filters, it is easy to filter out the core communication clusters (informal teams) from a large number of calls. This clip shows how to achieve it in a few moments:

The following parallel graph model describes intense communication between two objects. In this model, all relationships are visualized exactly as they are stored in the graph database. Every directed edge represents one event of communication. The arrow indicates the direction of communication. Such visual representation is the basic Graphlytic relationship model named: "Show all relationships".

To have all edges visualized select the highlighted 'Relationships' button in the Tools panel of the Visualization screen:

FEATURES  OF THE PARALLEL RELATIONSHIPS GRAPH MODELS IN GRAPHLYTIC

This video shows the basic principles behind the merging of parallel relationships and using the use of the 'Timeline' filter to include only time-relevant relationships in the visualization view:

To switch to this graph model select the second button on the Relationships menu in the Tools panel:

The second model of merged relationships: "Merge all parallel relationships" simplifies the visualization even more. It merges all relationships between two nodes and does not distinguish between the directions. This model is easier to render and therefore it is recommended for use it when you want to visualize large graphs.

This option can be selected by clicking on the third highlighted button:

You can use certain predefined formulas, modify them, or create a new one: When the timestamp is stored for every relationship (date and time of the event occurrence) Graphlytic's 'Timeline' feature can be used to visualize a specified time interval. To turn on and off the Timeline, switch the icon marked with 1 in the below-attached Graphlytic visualization print screen.

After turning on the Timeline, you can easily manipulate the slider (marked with 2 in the picture below). This way it is easy to compare visualizations for different time periods like months or days.

Parallel relationships models are great in their flexibility and easy to set up and maintain features but in the case of large datasets with hundreds of millions of records, another approach is needed. The main issues are the loading and processing times in visualization and also performing any graph query can become very challenging. For such situations, Graphlytic supports Hybrid data models.

Hybrid data model is a model where only necessary graph data are stored in Neo4j without any parallel relationships. Detailed event data are stored in a separate non-graph database with fast and flexible searching, like Solr, Lucene, Elastic, etc. With proper Graphlytic configuration, such architecture can be used to combine visualization data from multiple data sources (hence the "hybrid" name) with great performance. If you are interested in using the Hybrid data model please contact us and we will help you with the assessment and architecture design.