Most common Graphlytic use cases

We have successfully used a combination of configuration and customization in use cases such as Fraud Detection, IT Infrastructure Modeling, Communication Analysis, Source Code Refactoring, Workflow Analysis, Process Mining and more. Below are brief examples of two common scenarios where we used Graphlytic : Data Modeling and Communication Analysis.

Video below shows how easy is to model graphs (nodes and relationships) with Graphlytic.
First I'm going to create four nodes - two of them with the "Company" label and the other two with the "Person" label. Then I'm going to create relationships based on the ownership structure - in this case Person 1 owning some part of both companies and Person 2 owning part of the Company 2.

Next I'm going to add the "name" property to each node with values like "Person 1", "Person 2" etc.
After modeling I'm going to style the visualization a little bit and save it to my visualization for some later work or for sharing with other users.

Communication And Process Analysis With Graphlytic

Over the years of using graphs for workflow, process, and communication analysis we have developed a set of features in Graphlytic that allows us to do this kind of work using graph models with large numbers of parallel relationships. This kind of model has it's pros and cons but the pros are in our opinion really good and the cons are at least manageable.

Graph model in such case is really simple:

Of course this approach can be used only if your events are connecting exactly two nodes which is not always the case but we have found that most of the time it can be used and the result has some nice features:

When the timestamp is stored on every relationship (date and time of the event occurrence) Graphlytic's Timeline feature can be used to visualize only some time interval. This way it's quite easy to compare visualizations for different time periods like months or days.

This is how parallel model looks like in Neo4j browser: 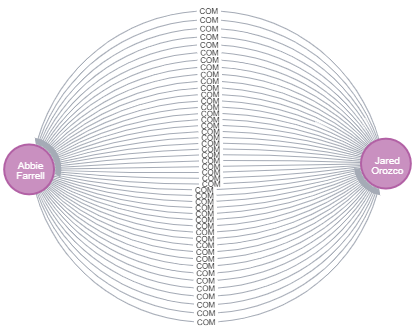 This is how parallel models are handled in Graphlytic:

Start today and see yourself how powerful graphs can be with Graphlytic!
Try Online Demo

We are a bunch of data analysts and coders from Slovakia and we are making graph visualizations from 2008. Starting with specific domains like Business registry analysis we quickly begin to gain graph knowledge and when we started using Neo4J database it was all clear - we had to make GRAPHLYTIC to enable all teams of analysts to quickly and collaboratively use their graph data with no coding required.

Please leave your email below and we will send you download links, trial license and some hints on how to start immediately.